by Alex Anderson for www.chaandu.com

See @ChaanduActive Instagram for more pics of climbs and more!

In Early August a group of friends and I decided to head out to Wyoming, in hopes of climbing one of North Americas most unique National Monuments, Devil’s Tower. This Tower rises dramatically from the surrounding planes in Northeastern Wyoming. Devil’s Tower has a climbing history unique to any other area in the country, as it was first climbed in 1893 using wooden pegs which were driven into cracks in the rock. Today, the Tower is a crack climber’s paradise, comprised of hundreds of columns stretching from its base, all the way to the summit. Between these columns are cracks of every size and shape. We were here to climb a Tower Classic, El Matador.

Less than 1% of visitors to the Tower are in search of making it to the top. Most are content with viewing this Natural Wonder from the safety of the paved “Tower Trail”, which wraps around the tower in a 1.3 mile loop. As soon as we arrived in the parking lot and began gearing up for our climb, we were bombarded with questions from the hoards of curious tourists about what it is like to climb Devils Tower. What’s at the top? How long does it take? Is it Scary? The answers to these questions were as unknown to me as they were to the tourists, since I had never climbed Devils Tower before. I had heard stories of these inquisitive Tower Tourists, and with a voice full of optimism, I told them that I didn’t know the answers to these questions yet, but that in just a few short hours, I would. With our rope slung  over my shoulder, we continued on our approach to the base of the Tower.

After completing the strenuous second pitch, a few hours had already passed. We still had 3 pitches left to reach the summit, and from our vantage point 250 feet above the ground, I swore I could see the same curious tourists watching me swallow my optimism in one painful gulp. This same optimism had caused us to forgo an early alpine start, and instead opt for starting our climb later in the day when the sun would be shining directly on our route, located on the west face. Something we would soon regret.

We climbed through the hot afternoon sun, and found ourselves located 300 feet below the summit with the sun quickly setting. Breathe, believe, keep climbing, I told myself. The warm summer air soon became crisp and cool, as the sun bid its last farewell and sank peacefully below the horizon behind us. Headlamps on, we climbed into the dark. Reaching the summit around midnight. We were the only people on the Tower as the stars illuminated the clear August night. We made it, and it was more peaceful than I could have ever imagined. As we rappelled back to the ground, I was surrounded by the light of my headlamp, alone in my own bubble of light and happiness.

The next evening we decided to make one more stop at the Devil’s Tower Visitor Center, to watch the sunset light up the Tower in yet another magical display of this natural wonder. We stood around the van, sharing the same feelings about what it was like to be a Devil’s Tower 1%er. One of those who had climbed to the top. As a family of tourists neared the van, I promptly slid our climbing ropes and gear under the back seat, out of their view. 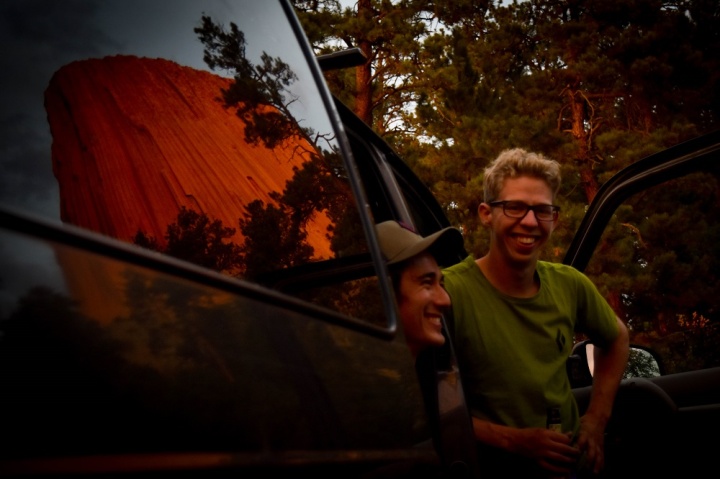 One thought on “Climbing Devils Tower”