As promised in a previous post, before I move on to my travels in Cambodia, I will share my tips for bus riding in Hong Kong. Here is what I did, and how I suggest you do not do the same thing.

First things first, the subway system in Hong Kong is spectacularly easy to navigate and also clean. The only thing the New York subway has that HK doesn’t, is intrepid creatures like Pizza Rat. But as much as I love scrappy NYC sewer fauna, I would trade them in in a second for not having to worry about what’s in the ambiguous puddle in the seat next to me. Plus, you can experience NYC rats outside of the subway, in beautiful locations like Central Park. Here is a photo I took during a photography class before AND during a rat fight under my tripod. 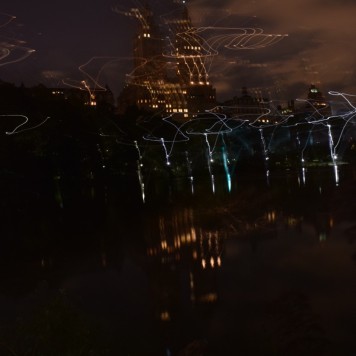 Anyway, this story is about the bus, I just wanted to give props to the fresh & clean subway.

On our first morning in HK, Kate and I decided to take a city bus to Victoria Peak. Let me first say that buses have ALWAYS given me anxiety. When I was younger I lived too far to qualify for school bus riding privileges. Every time I went to a friend’s house on the bus, I could feel millions of tiny child eyes staring at the interloper. This fear has lead me to avoid the bus in New York because New Yorkers are (slightly) more vocal than elementary school children, especially if you slow down their commute (by being a first time bus rider, for example). How did I survive this long AND make it half way across the world, you ask? Great question.

When the bus arrived it looked (and drove) just like the Knight Bus from Harry Potter. I stepped onto the bus and handed over my bus fare like I was handing a fake ID to a bouncer (which I have never ever done, so I’m just guessing what that feelings like). Kate had previously broken her large bill, but what I offered was apparently unforgivably large. Basically my nightmare had come true and I could feel my bus-riding shame sinking in as Kate and I tried to scrounge around for smaller bills. Luckily for me, punctuality was more important to our driver than the price of a ticket, so he shooed me on with a mix of pity and annoyance (also an expression I imagine a bouncer might make to a very pathetic underage college student). Having persevered in the face of such adversity, Kate and I proudly climbed upstairs to the winner’s circle (the top deck) and grabbed seats. As you can see from the feature photo, if there was any confusion among the other passengers about who caused the delay, my appearance made it abundantly clear.

But everything that goes up (to the top level of the bus) must come down, and so the bus riding challenges continued. Kate and I were pretty sure we knew what our stop was, but were unable to keep track of what stop the bus was actually at, because it moved at warp speed. Passengers had about one second to fling themselves out the door before it blasted into outer space. We decided to walk downstairs one stop early so that we would be ready to disembark promptly and redeem ourselves. This did not happen. As we were walking down the stairs, the bus lurched forward and my legs flew out from under me. I was holding onto the support rail so my lower body flung (flang?) around the railing like an overexcited pole dancer, accentuated by my camera around my neck clanging around loudly. I somehow composed myself and slithered down the stairs to hide behind Kate until we could get off the bus. Kate and I were laughing too hard at the memory of my body flying through the air to care that we had gotten off at the complete wrong stop. All in all I would say we pretty much failed at taking the bus in every possible way.

The moral of the story is: it’s probably smart to figure out the bus fare ahead of time, and have small change. Also, don’t sit on the top deck (that’s only for expert-level bus riders).

Lillian Ciardelli recently graduated with an MA in Animal Behavior and Conservation from Hunter College where she studied nonhuman animal personalities. She is currently working towards becoming an Associate Certified Applied Animal Behaviorist (ACAAB) in order to pursue a career in animal management or consulting. Lillian’s ultimate passion is improving the psychological welfare of animals in captivity through improved understanding. She also believes that communication to our generation about caring for our planet should be accessible, positive, and inspiring and hopes this blog (and her new found love of photography) will start that change! View all posts by Lillian Ciardelli