I’ve been in love with Germany since my first trip to Europe.

In 2015, I visited the small towns of Boppard and Rothenberg, in addition to taking a short cruise along the Rhine. When I returned to Germany last week, I spent four days in its capital: Berlin. The city’s modern energy coupled with its rich history create an unparalleled, captivating experience.

My trip began with a 6 a.m. flight to Berlin’s Tegel Airport on Friday morning. After finding some breakfast at a small konditorei near my hotel, I embarked on a three-hour historical tour of the city. We visited the Brandenburg Gate, Checkpoint Charlie, and many other noteworthy sites from WWII and the Cold War. About halfway through the tour, we stopped in front of the Reichstag, Germany’s parliamentary building. The country’s flag waved over the building’s baroque domes to create a stunning profile. 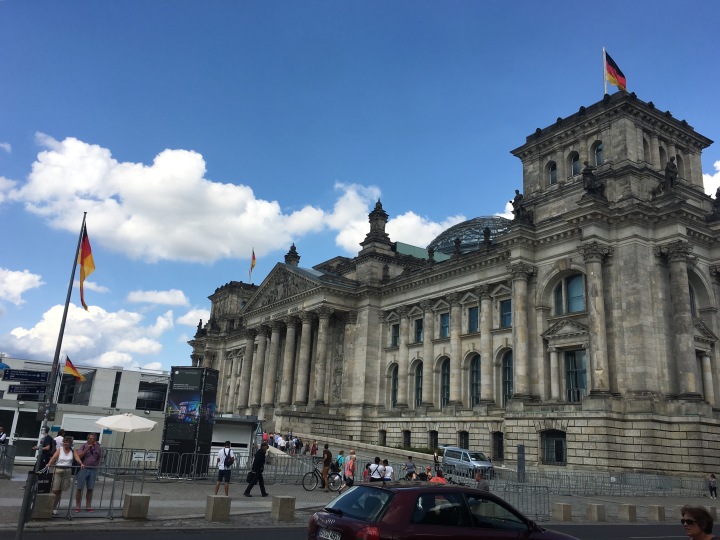 Throughout the day, we passed small pieces of the Berlin Wall; however, it wasn’t until the end that we met the Wall’s most famous stretch. The East Side Gallery is a section of the Berlin Wall, approximately two miles in length, entirely covered in murals by artists from around the world. I often feel underwhelmed by well-known tourist attractions; however, the East Side Gallery did not disappoint. While the Wall was once a symbol of hardship, the beautiful images painted on the concrete now promote peace and unity. It was a great way to end the day. 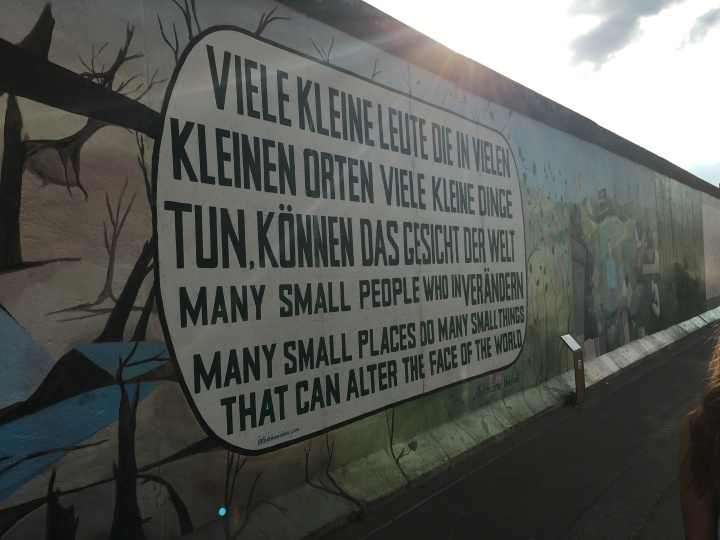 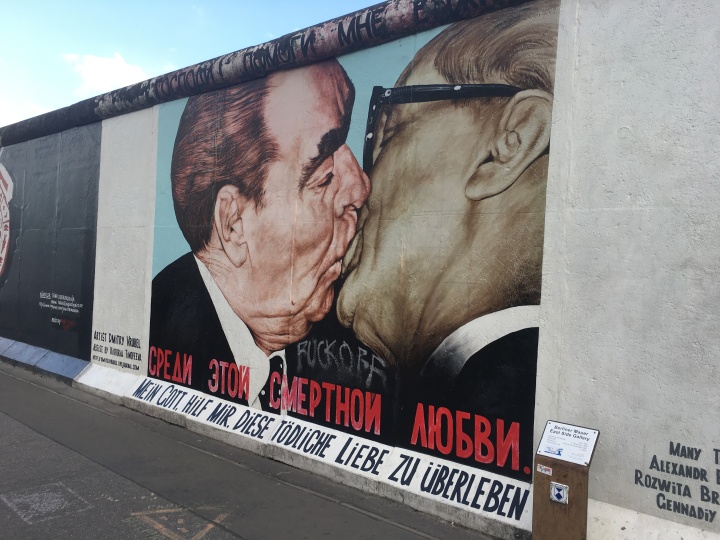 On Saturday, I explored an industry that Berlin is known for: fashion. I began my day with a stroll up Kurfürstendamm, the Rodeo Drive of Berlin. Teslas and Lamborghinis casually cruised down the street as I walked past stores like Cartier and Bottega Veneta. 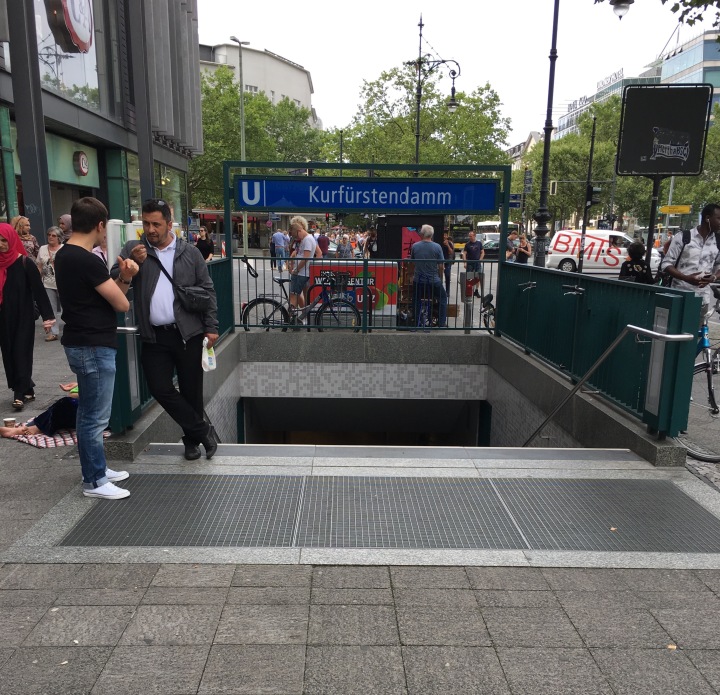 Next, I headed to Bikinihaus, a shopping mall and plaza filled with pop-up shops by up-and-coming designers. I explored many of the tiny stores and eventually bought two dresses. After this, I headed toward Wittenberg Platz to visit Kaufhaus de Westens (KaDeWe, for short). Imagine Saks Fifth Avenue and Bergdorf Goodman put together: that’s KaDeWe. It is the single most opulent department store I have ever seen. The massive building contains four floors of luxury goods, one floor of home decor, and one floor of gourmet delicacies. It is the epitome of modern consumerism. The entire top floor of the store is a vast buffet-style restaurant that could rival any hotel in Vegas. I splurged on a large lunch before heading out to continue exploring the city. 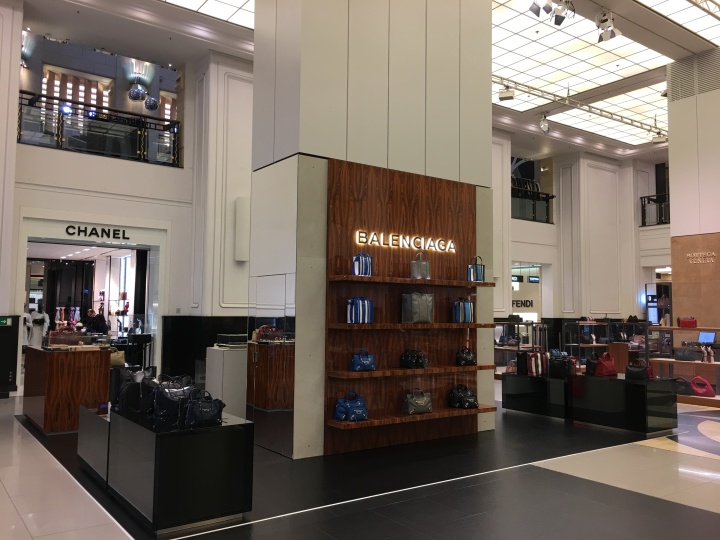 That night, my friends and I headed to Alt-Berliner Biersalon for a traditional German dinner.  While my friends ate brats and schnitzel, I ordered käsespätzle (cheese pasta with onions), and Kraft Malz (a nonalcoholic malt beverage, often described as children’s beer). The meal made my stomach heavy with satisfaction. After dinner, a few of my friends headed out to experience one of Berlin’s world-renowned EDM clubs; however, I opted for some much-needed sleep instead. Our hotel, located on a sleepy street in the Charlottenburg district, was cozy and refreshing. 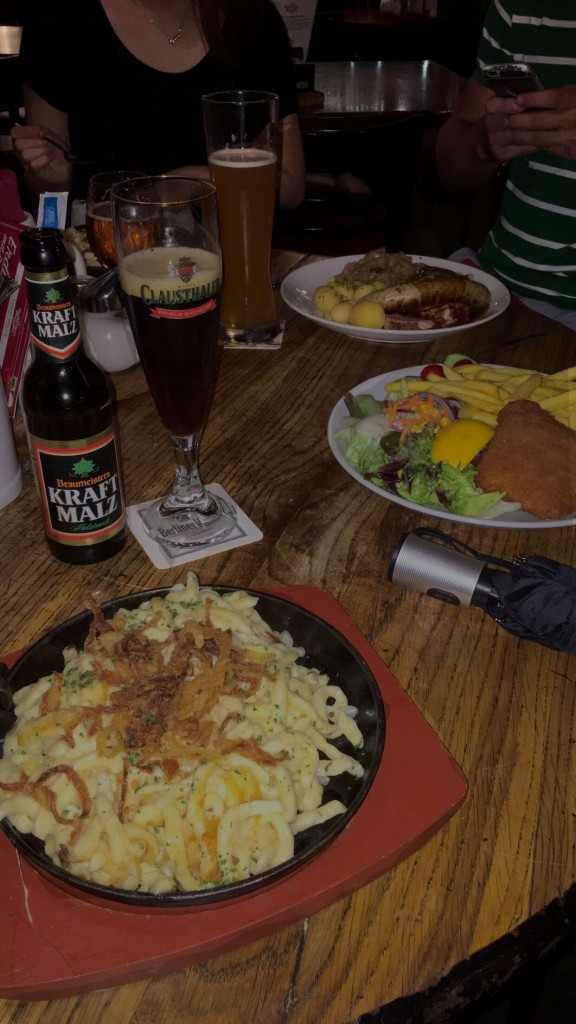 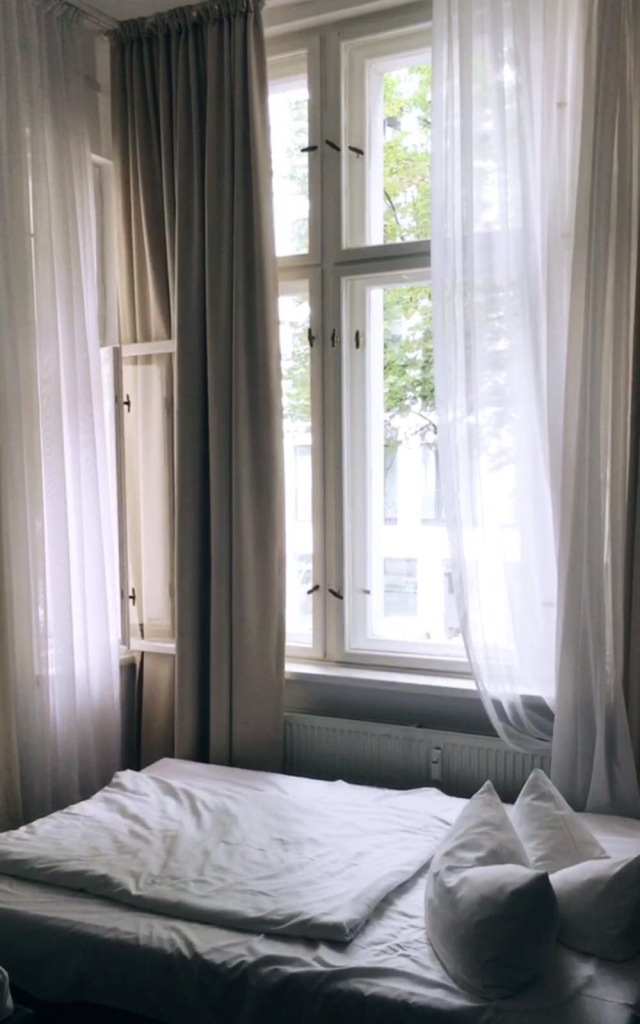 On Sunday, I embarked on the most difficult and impactful part of my trip: a visit to Sachsenhausen Concentration Camp in Oranienberg, Germany. The camp sits in a sleepy suburb about an hour outside of Berlin by train. As I walked toward the intimidating watch tower with the infamous “Arbeit Macht Frei” gate, I felt my stomach begin to churn. The very tragedy that I had been reading about since the 4th grade was suddenly in front of me. After purchasing an audio tour, I spent two and a half hours walking around the grounds. The historical artifacts juxtaposed with the actual setting where the atrocities occurred was chilling and sobering. On the whole, visiting Sachsenhausen was a very difficult experience, but well worth it. 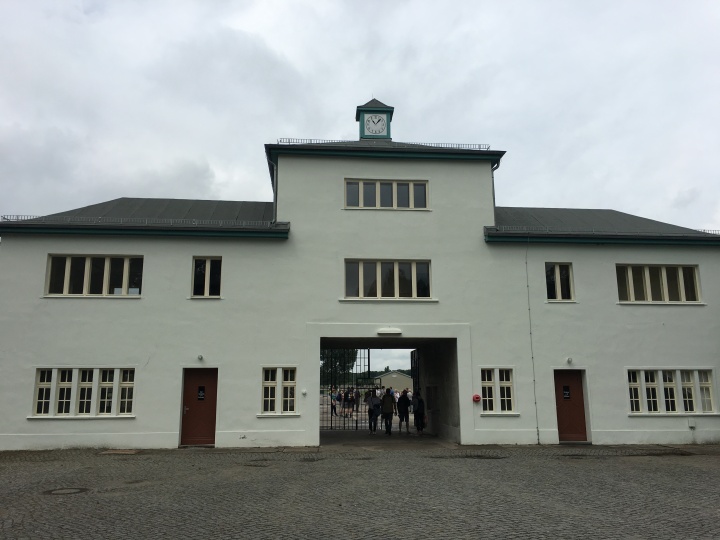 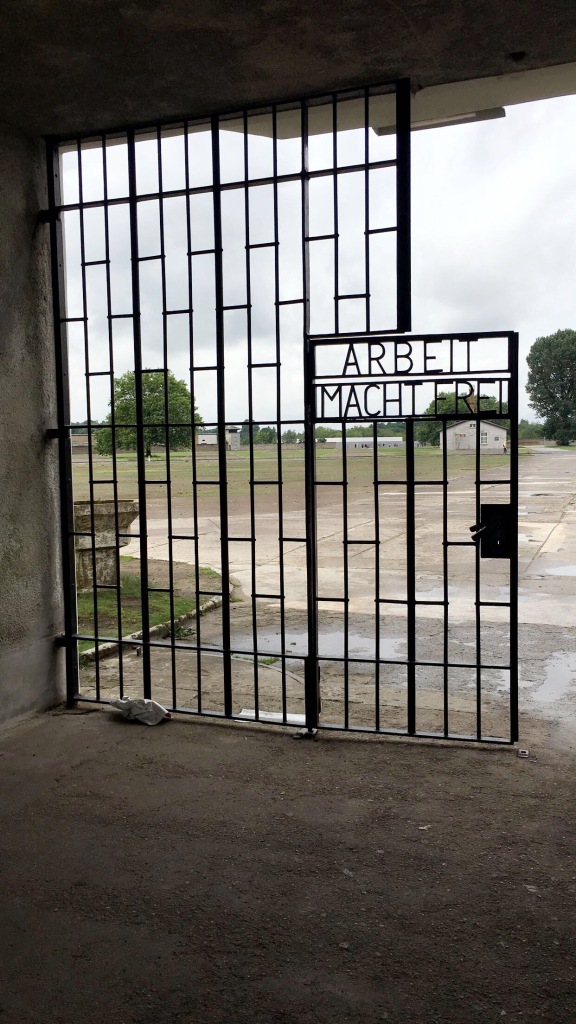 On my last morning in Berlin, I re-visited the shopping district in pursuit of souvenirs and lunch. Still spellbound by my first visit, I returned to KaDeWe. I meandered around for several hours, buying a few small trinkets and a souvenir einkaufstasche (a small linen shopping bag). Before leaving, I made a stop in the gourmet grocery section and indulged in an incredible apple strudel. 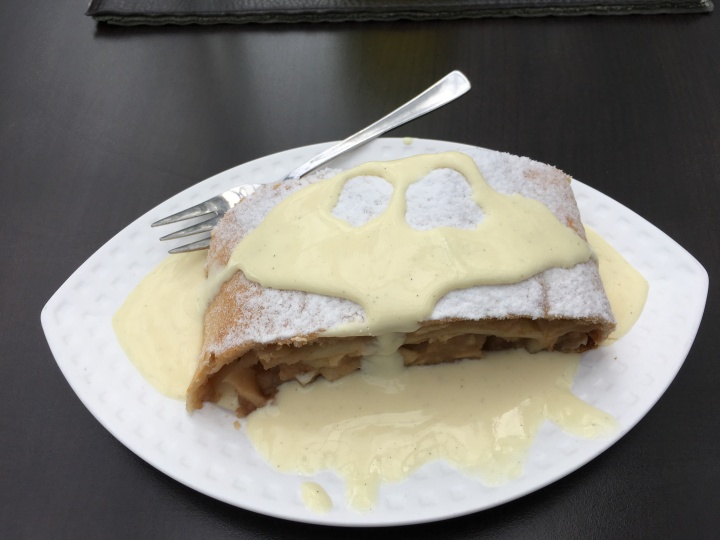 As I ate my pastry, looking out the window at the city below, I felt genuinely sad that my trip was almost over. The city left an impression on me. Berlin’s breadth and depth make it vastly different from anywhere else I have ever been. From the introverted history buff to the fashion-forward socialite, everyone can find something interesting to do. Like New York City and Paris, Berlin has something distinctive and important. The city’s significance is tangible. Berlin is a reminder of the past, an emblem of the present, and a sign of the future. 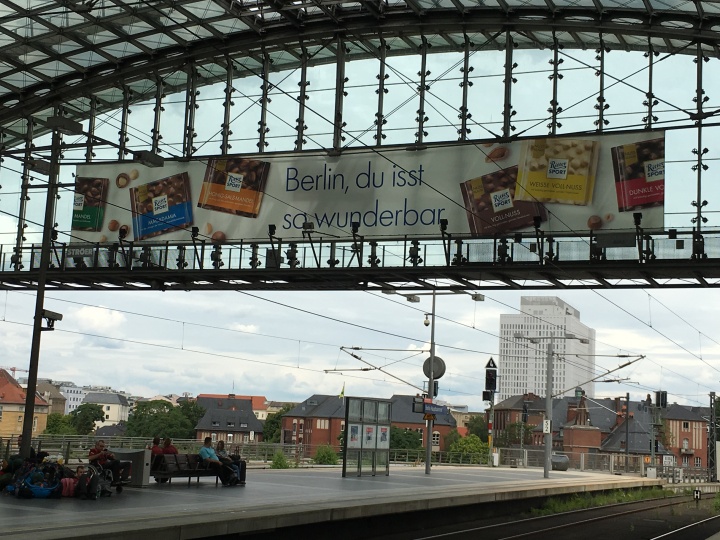