Last week I crossed two new Florida State Parks off my list: Eden Gardens and Deer Lake. The two were vastly different; the first consisting of the gorgeous grounds of a historic house, including azalea and camellia gardens; the second made up of a white sand beach along the Gulf, a rare dune lake, and a trail through the sand pines and palmettos of the Florida Panhandle. At the end of the day, I had seen  a total of 18 state parks in Florida – 156 to go!

I am undertaking this pretty awesome “mission” with the Florida State Park service. Each week, they post a blog, photos, and video from my adventures across the state, showing regular and new visitors alike each park from a first-person perspective. So far I’ve visited a freshwater pond at the bottom of a sinkhole at Devil’s Millhopper Geological State Park, a historic Fort facing the water at Fort Clinch State Park, a large lagoon along the Gulf aptly named Big Lagoon State Park, and so much more. Each park presents a unique slice of the cultural and ecological history of Florida, a state rich in biodiversity. 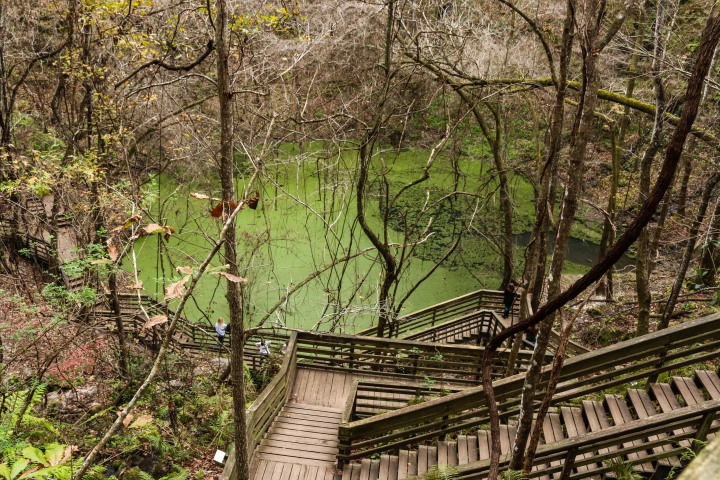 The best part about my goal of seeing all 174 sites is that it takes me to places I might not necessarily stop at on my own. Take Devil’s Millhopper Geological State Park: it’s not large, and has one defining feature: its sinkhole. Still, the entrance was just off the highway, and so I dropped by en route to Tampa.

I was so glad that I did. The park was incredible. A wooden boardwalk took me down and down and down, past the freshwater streams cascading over the side and the dripping ferns. The pond itself was covered in green algae, completing the “Never Never Land” look of the whole place. Right there, in the middle of Florida, was a tiny rainforest.

I know that I’ll have similar surprises and beautiful finds as I work my way across the state. Bring on the next 156!