Inadvisably walking alone in rural Panama, I stopped in my tracks, heart pounding, at the sight of six or seven tails, standing upright over the vegetation ahead of me. The rest of the animals to which these tails belonged were out of view. As it was my first time in Panama – and first time outside the U.S. for that matter – I had no idea what creatures stood just fifteen feet away from me, tails swaying in the air. Could they be predators?

Luckily, my curiosity overcame my fear, and I edged around the vegetation to discover some of the most adorable animals I have ever laid eyes on: a band of coatis. Cousins to the common and rascally raccoon, coatis live in groups of females and juveniles, with males cast out for a solitary life around two years of age. Indeed they are predators, but of small insect prey. They forage for insects in the leaf litter on the ground and also consume fruit, making them omnivores.

This particular fellow I photographed resided in Peru at a sanctuary for orphaned and injured animals, much like the one described by Wout Salenbien in a recent post. The young coati relaxed on his perch twelve feet off the ground, and appeared just as watchfully curious about the humans below, as we were about him. On the road between Cusco and Manu National Park, I visited the donation-based sanctuary, and met a variety of species that are otherwise quite difficult to observe in the wild: a baby tapir, a scarlet macaw, a baby howler monkey and more. Remarkably, the animals are not caged and locked in. Instead they are supplied with food and safety, but are free to go as they grow strong and see fit! 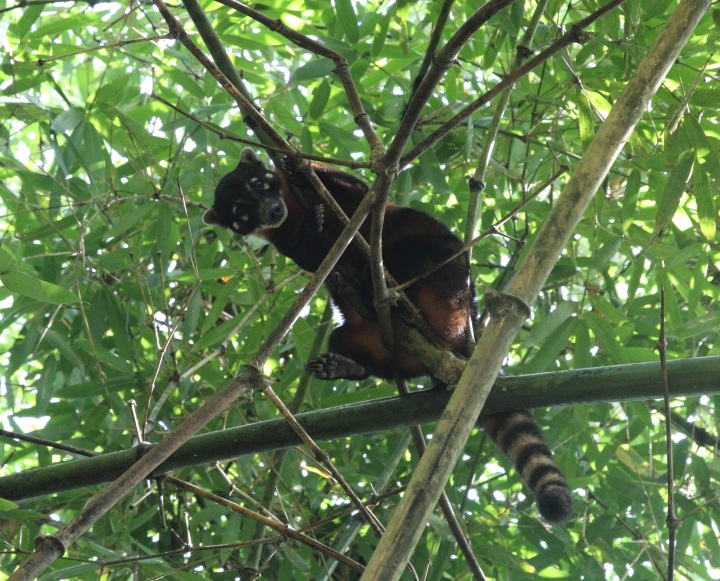 Stephanie works as an environmental scientist in the San Francisco Bay Area. She enjoys exploring natural areas while hiking, birding, kayaking, running, and practicing photography. Originally from San Diego, California, Stephanie believes in the immense positive influence that outdoor experiences have on a person’s life, and hopes to encourage others to pursue their own connections to nature. View all posts by Stephanie Panlasigui