Hands down the most enchanting and challenging hike I’ve ever been on was known as the “Death Hike” by locals on the Big Island of Hawaii.* While I’m always up for a good adventure, I am by no means an extreme thrill-seeker or adrenaline junky. So I surprised myself when I agreed to go on the ominous hike led by my roommate who grew up on the island. I pried as much information as possible out of him but with little success. He did tell me it was at Akaka Falls State Park, which I quickly googled and found a description of a “pleasant 0.4 mile uphill hike” on a “paved footpath” that takes you through a “lush rainforest filled with orchids, bamboo groves and draping ferns” to the base of a 442 foot waterfall – arguably Hawaii Island’s most famous waterfall. He laughed when I told him it sounded like a walk in the park! Turns out the 8-hour round trip hike doesn’t turn up in any google search, as it involves climbing to the top of the waterfall on an unmarked trail (and I use the term trail loosely) – not to mention it requires a bit of trespassing. I started to understand why it was called “The Death Hike.”

I was living in Hawaii doing field work for a Spinner dolphin research project, and we were able to convince a couple of the girls on the team and some other locals to join. We were living on the west side of the island in Kailua-Kona which was on the opposite side as the falls. There are significant differences in climate between the two sides, due to the island being in the path of the Trade Winds which blow east to west. As the moisture laden air rises up over the east coast, it cools, condenses and falls nearly all year long resulting in lush vegetation and many waterfalls. The west side lies within the rain shadow, thus the colloquialisms: “desert side” vs. “rainy side.” I knew I couldn’t return home without exploring the island’s rainforests and this was the perfect opportunity to dive deep into them.

Geared with Subway sandwiches, water, cameras, and game faces, we were as ready as we could be. In retrospect, helmets would have been a wise addition to our packs. We started at the state park entrance but within minutes of our trek, all infrastructure was out of site and we were plowing through an overgrown field. Sure enough, we came across (and anxiously disregarded) a no trespassing sign. The trail was extremely narrow and muddy with nothing but a curtain of green foliage between us and the edge of the steep rocky walls, so it required a lot of agility and focus. On occasion, we had to crawl under tree trunk caves and skirt around mini sink holes. Hiking sticks were crucial for probing the ground before each step; some of the mud covered pits open straight to the bottom of the gorge! I all but forgot about the main attraction – the waterfall – as we ascended. The vegetation kept it out of sight pretty much the whole way up, and the continuous sound of water pounding the rocks dissolved into background noise, because I was so focused on staying on the trail.

A rare look at the falls on our ascent

Bushwhacking our way to the top of the falls

Once we reached the top of the waterfall, I was astounded by the view. There was so much excited energy amongst our group as we splashed in the clear water and cautiously peered over the edge of the fall. The people on the ground looked like tiny ants and I am not sure they ever took notice of us and the few adventuresome souls that also made it to the top. We were there for about maybe 20 minutes or so and my roommate said “Alright, let’s go!”. I was just about to argue that there was no way we were already leaving, when I realized we weren’t turning back but instead continuing on upstream. Why had that not occurred to me as an option? I guess it’s because any time I’ve had the privilege to see a waterfall it has been from the bottom, and the falls themselves demand so much of my attention that I never put much thought into the source waters.

He advised us to put on our “Hawaiian hiking boots” (which really just meant take off our shoes), since we would be in and out of the river and climbing over slippery volcanic rocks. I learned early on to not second guess my roommate with these things; he would be happy to hear me confess to this now. 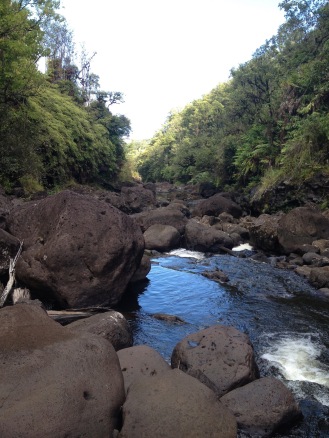 At this point on, I was in such a state of euphoria that it feels as though I’m writing the story of a dream rather than of reality. We trekked onward, and to our surprise ended up seeing two more beautiful though much shorter waterfalls. But these were special in that they felt entirely our own; almost as if we had discovered them for the first time. 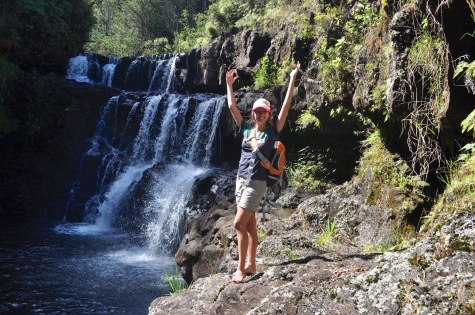 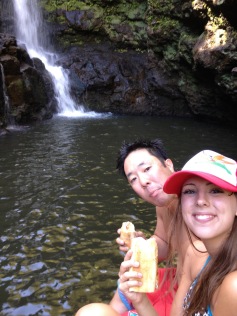 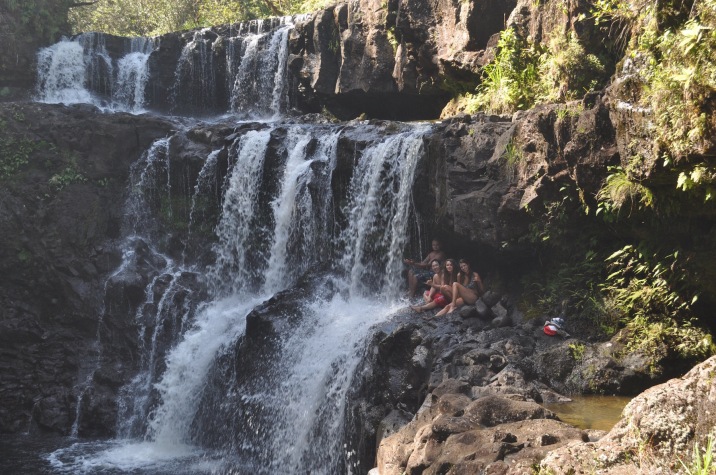 Group shot at one of the smaller falls

As with most hikes, the return trip can be even more challenging and this was no exception. It was a long, fantastical, challenging day, and we managed to return in one piece before the sun set.

I came away with three thoughts/wonders:

* Correction: I recently found out this was the name given by my roommate’s friend who was from New York City (not a local), but it still seems a fitting name to me!!

One thought on “Conquering “The Death Hike””