A couple of weeks ago, I had the wonderful opportunity (thanks Sandra!) to attend a delicious eight course tasting menu at The Four Seasons Restaurant.

Now what makes this visit worthy of a post? This restaurant has been a New York City classic since 1959 and, unfortunately, is closing its doors in the summer of 2016 and opening somewhere else in Manhattan.

To give you a little background…

The restaurant was designed by Phillip Johnson and Mies van der Rohe. I’m not going to pretend like I am an architecture connoisseur, but I do know that MOMA considers their work relevant enough to have about 100 pieces of the restaurant’s elements as part of their permanent collection. The restaurant’s appearance has gone mostly unchanged since its opening, but certainly doesn’t look dated at all.

Additionally, the restaurant has housed many Modern Art pieces over the years. To name a few: Andy Warhol, Frank Stella, Jackson Pollock, Helene Frankenthaler, Robert Rauchenberg, Joan Miro, and Pablo Picasso. The Picasso curtain, which was installed in the entryway to the restaurant for its opening in 1959, was removed in 2014 and its removal process caused quite a bit of controversy at the time.

Lastly, The Four Seasons is more than just an enjoyable culinary experience; it is said that the restaurant brought several firsts to the US:

But, less about the history and more about the food, it is a restaurant after all…

For our meal, there were carefully selected options to highlight the restaurant’s more popular dishes and great wine pairings.

As a nice touch, they printed out the pairing menu with our organization’s logo below theirs: 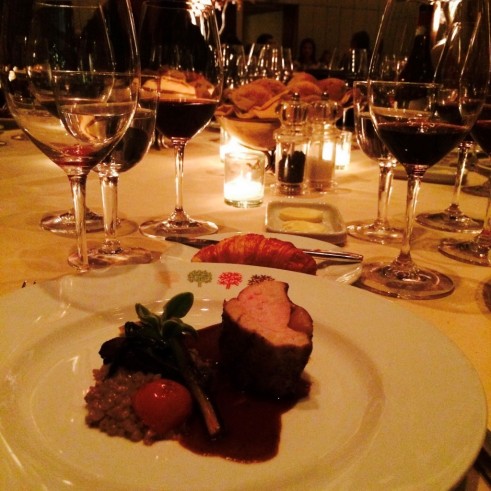 As an additional treat, they gave their signature cotton candy with candied berries in it. My not-so-inner child was thrilled.

Nikkita was a born explorer. Raised in a few different countries by parents from two very different parts of the world, seven hour flights and funny sounding food were the norm. She graduated Cornell University with a degree in Statistical Sciences, a passion for photography and food, and a need to see more of the world. View all posts by Nikkita Mehta