Life in the big city for a dog is very different than what I (or my dog for that matter!) am used to. The biggest city I have ever lived in is nothing compared to New York City.

I recently went to visit my sister in Manhattan just south of Central Park. While I was just complaining the other day to a local tenant about the lack of grassy areas around our apartment in North Carolina, dogs in Manhattan wouldn’t know what to do with grass (according to my sister). I was floored by this and asked, horrified, what they did when they needed to go to the bathroom? Apparently they just go on the street or on the subway grates – my sister’s pug, Doodles, prefers the subway grates.

But since they have been born and raised in the city, they aren’t missing grass. Much to the contrary, they have big, amazing dog parks with ramps, jungle gyms, and pools, right in the middle of the city! Doodles also goes to doggie day care and joins his friends in hours long play sessions. Sometimes Doodles will get too keyed up, and the rough play begins: dogs need time outs too.

They get to learn interesting city-specific behavior as well. When they walk along the sidewalks, Doodles takes his cue when to wait at the crosswalks. Then, even if his owner isn’t aware it’s time to move, he will cross the street with the moving crowd. Just in case you doubt how species city dogs are, when Doodles isn’t walking he has his own little doggie-stroller that he quietly sits in. Even on the subway!

Doodles in his stroller, trying on his Halloween costume.

He also sits patiently during 50-floor elevator rides, and when the door pings he paws at the center where he’s expecting to get out. In what seems like a universal pleasure for dogs everywhere, Doodles also takes joy in fetching the newspaper. However, in the city it is brought to the apartment door, and Doodles is very careful to hold it so as not to puncture the plastic coating!

Doodles, ever the helpful pet, waits outside the trash compactor room while my sister deposits the trash. Many of these activities would baffle Stevie, my doggie companion, who is terrified by the outdoor trash compacter, has never seen a subway, and won’t sit quietly hardly anywhere (hopefully something she’ll grow out of).

While it is still hard for me to wrap my head around the fact that a dog can live without grass and wildlife, they have their own concrete jungle (as cheesy as that might sound) to love all on their own. 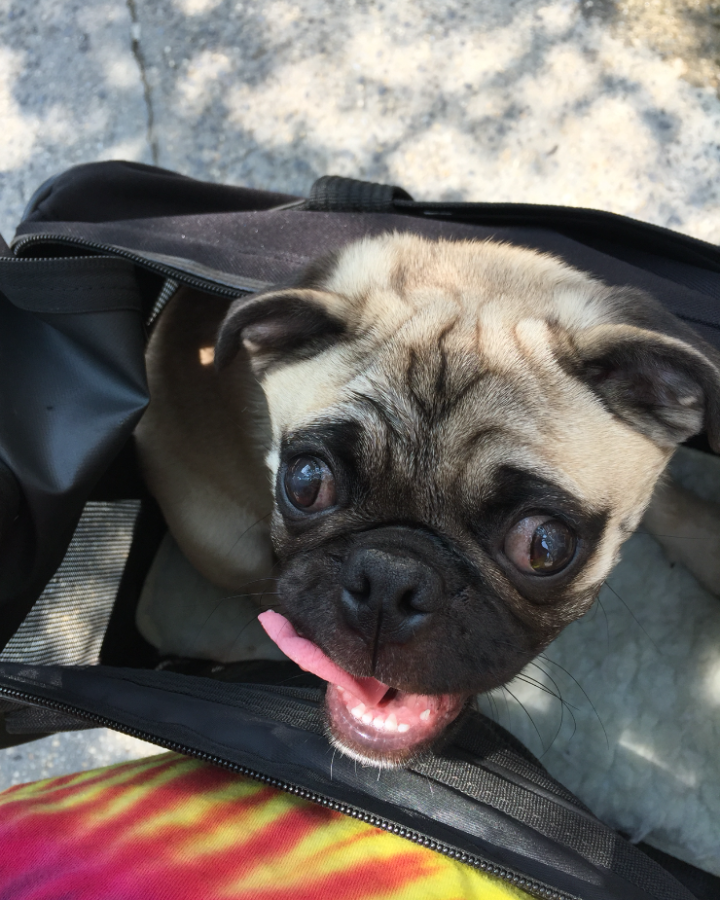 One thought on “Little Dog in the Big City”

Casey is a recent graduate with a Master’s of Environmental Management from Duke University's Nicholas School of the Environment. She completed a Bachelor of Science at Iowa State University. During her education she has travelled to 13 different countries, met people from all over the world, and hiked trails from Macchu Piccu to the mountains in Germany. In 2014-2015 she was a part of a Biodiversity SWAT team that produced an inventory of spiders in the Rocky Mountains. A Minnesota native, she is not a stranger to hiking or the outdoors. A lot of her hikes are accompanied by her dog Stevie. Coming from a home with four dogs, she was always itching to get one of her own. After seeing Stevie on a Facebook group for dogs, it was love at first sight! Stevie is a five pound Pomeranian-Yorkie mix that loves chewing on any stick she can find and looking for food her mom has dropped. View all posts by Casey Johnson