When I was a kid, my dad and I used to drive along country roads, scanning fields for milkweed.  If we spied anything we would quickly pull over, hopping out of the car and searching the leaves for black, yellow, and white caterpillars. Scooping them gently into a mesh case labeled “Erika’s bug motel,” we would delicately transport them home and into an empty glass aquarium, complete with sticks and more milkweed to munch on. Eventually, the caterpillars would stop stuffing themselves and create their bright green chyrsallises; I waited.

To my child self, it seemed forever passed until one day a chrysalis broke open, revealing the gorgeous red and black wings of a Monarch Butterfly. Now, almost two decades later, the Monarchs are again becoming a part of my daily life as they migrate past me on the Florida Panhandle.

In bright, flowering bushes along the dunes and bordering parking lots, Monarchs are flocking to eat up before continuing their journey. Though far from the unbelievable carpeting of butterflies seen in these photos, there are hundreds in the air and on the nearby wildflowers, far more than I have ever seen at one time. At sunset I find it difficult to leave Beasley Park, which lies along the Gulf of Mexico, because the butterflies just look so beautiful in the light of the sunset. 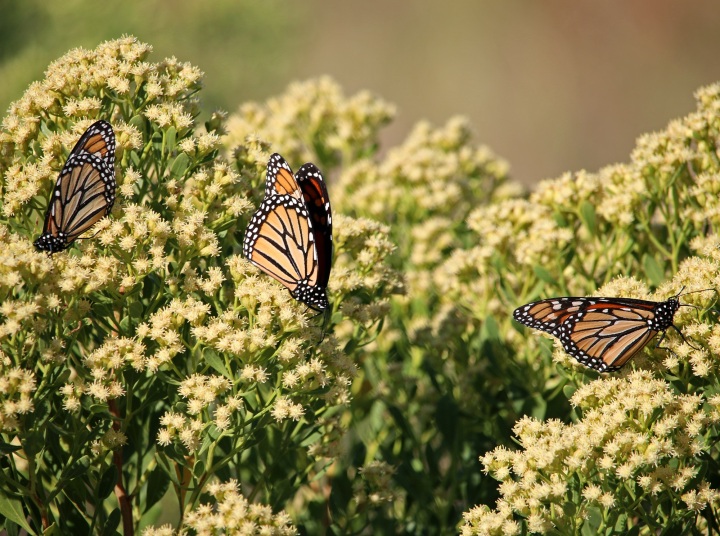 Along the Emerald Coast where I live and work, we witness an interesting split in migration. According to this map, Monarchs originating in the north travel to southern Florida to end their migration, while others fly much farther across the United States to end in Mexico. On the Panhandle, it can be difficult to know the final destination of the monarchs I see, and there are theories that some of the butterflies may take off across the Gulf itself. Since this is my first fall season here, I’m not sure how long I have until they disappear for another year.

Monarchs have been in the news a lot recently. Habitat loss has caused drops in population throughout their range, and in 2013 the butterflies that made it to Mexico at the end of their migration route hit an all time low. In the past twenty years their populations have dropped nearly 90%.

I’ve taken hundreds of photos and dozens of videos, and guess that I will continue to do so until they move on. Though I don’t have a place where I can plant native milkweed – which aids their breeding – I am reporting my sightings on e-Butterfly.org, a citizen science project that aims to track butterfly ranges. If we all do our part to save this incredible migrator, their numbers can climb to historic levels once again.

One thought on “Monarch Migration along the Florida Panhandle”