The Mongolian Grill. Anyone want some Bali Hai? Let me establish right now, this is not Mongolian food. It’s quite easy to generalize Asia as the place for budget foodies — at least I’ve always felt that there was some level of continental adoration for great cheap food. When I first learned that I would be moving to Mongolia, I romanticized the idea of galloping across the steppe, back home to the ger, and ducking out of the cold to a fresh, steaming-hot, bowl of… Mongolian Beef? Pad Thai?

What do Mongolian’s eat? is the question that kept coming up when friends and family learned of my future move across the world. With a herding livestock population of 15:1 (cows, yaks, goats, horses) in relation to humans, I was almost certainly going to be chomping on juicy steaks for dinner every night. Right?

I’ll go ahead and say, if you are a fine-dining nut, this might not be the place for you. Food here is a different concept, it’s an energy source and a means to an end – surviving the cold – not an opportunity to fit as many colors and befuddling tastes as you possibly can into one bite. Here are some of the things I’ve learned about cuisine since arriving. 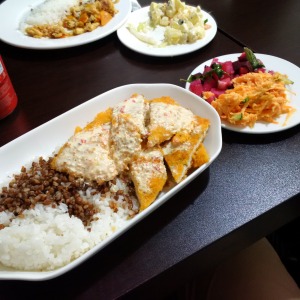 Mutton, simply put, is an old sheep. It’s a cheap cut with a strong flavor, and it’s used unceremoniously. Some say it’s a “friendlier” way to eat meat — Mongolians traditionally choose the oldest in the herd for dinner. And to be honest, knowing you aren’t eating a baby lamb that has’t left its cage before transforming into ‘the chop,’ actually has an improved moral hangover.

On the topic of killing animals, sort of a funny story: I was camping at Khovsghol with some friends by the lake when, out of nowhere, an entire Mongolian family rolled up in hummers and off-road SUV’s, and proceeded to set-up camp about two meters from my tent. We were amazed at the invasive foreign policy, but even more so when a live bleating goat was produced from the back of a car.

The goat was dragged to a patch of grass where a driver took a knife, made a small incision near the throat, reached inside and plucked the spinal cord. The goat was hoisted onto a line by its horns, and the fur was burned off with a blowtorch before being summarily dismantled and barbecued. Quite a different sight to the scenes of Meat Inc., where cows are tased to the skull until they drop, and chickens are shredded, feathers and all.

Anyways, I digress. Back to Mongolian cuisine: it has a heavy Russian influence and almost entirely falls in the ‘meat and potatoes’ food group. The majority of meals combine mutton or beef with carrots and potatoes, and are slathered in a thick brown gravy — a texture that applies to both food and air quality. Main courses involve meatballs, mutton hamburger patties and cutlets, fried eggs with some onions and tofu, Mongolian Shepherds Pie, Schnitzel, Curry, Korean soup, or cabbage and beef. ‘Bao tse’ and ‘Man to’ are very common, which meatballs inside steamed or baked bread.

Main courses are served on rice and dished with a bit of veggies — pickled cabbage, chopped beets, or carrots in mayonnaise. I’ve found that it’s quite filling, moderately healthy, and cheap. Most importantly, it keeps you going. The local option pricing starts at 3000 MNT, and usually has a price ceiling of around 6500. (That’s somewhere from 1.50 to 3.50 USD)

Some of the more well-known and traditional Mongolian dishes include fried mutton dumplings, ‘Khuurshuur’, boiled mutton dumplings, ‘Bhuuz’, or pan-fried noodles with cabbage, carrots, aaaand mutton — called ‘Tsuivan’. (Getting the idea about mutton?) Khuurshuur is made and consumed year-round, but I recently heard that it is specially made during Naadam in a way that is tastier. Bhuuz is not great, not bad — you’ll shrug your shoulder and think that it’s the same dumpling you’ll find anywhere.

The food of Nomadic herders in the countryside is quite different, as the dishes previously described are significantly more energy-intensive to what herders get by on — berries, bread, cheese, milk, cream, maybe some jerky. You can easily find enough aaruul (a very sour, chalky, bitter cheese) to kill the hopes and dreams of a small child.

Funny Mongolian saying I just heard about food: if your food is very salty, it means the cook is either pregnant, or in love!